Sammy invites you to the world of binaural recording 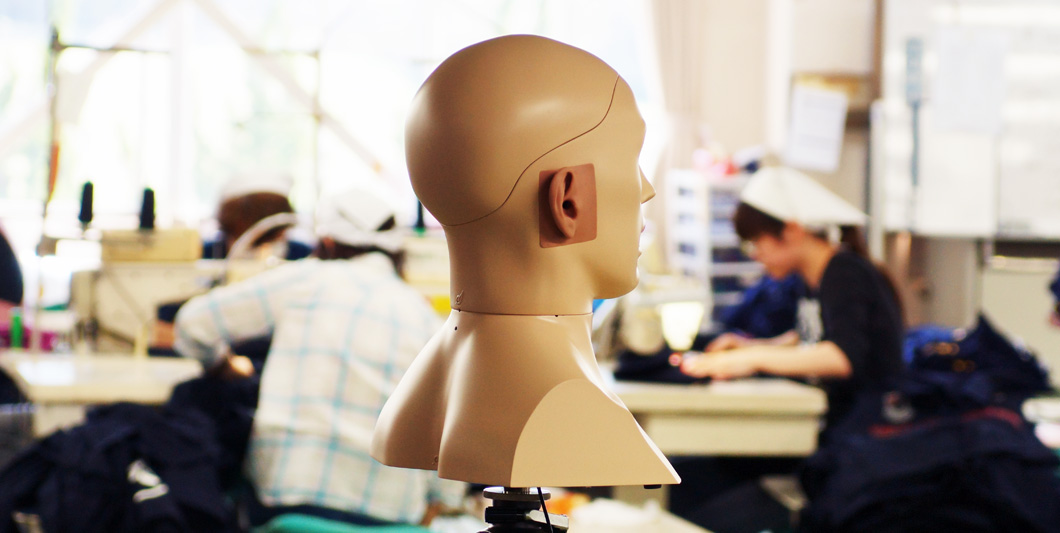 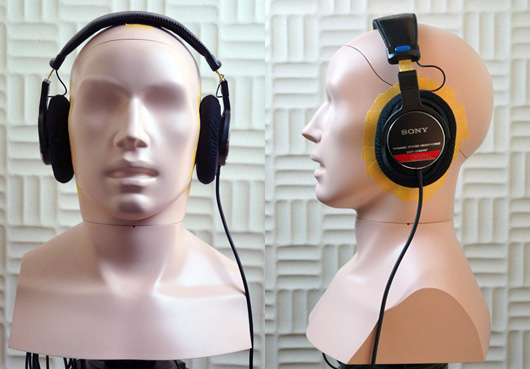 What is binaural recording?

Binaural recording is a recording method that uses a device called a "binaural head"* to reproduce sound as people actually hear it with their ears. A binaural head generally incorporates a special microphone (ear simulator) to recreate the human ear structure in the head model, so that it can reproduce sound as picked up by a person's eardrum. Therefore, a binaural recording, when listened to with headphones, sounds incredibly realistic.

On this page, we’ve posted audio from various places recorded using our binaural head “Sammy”. The head is SAMER HATS4500E from Southern Acoustics, which we regularly use in acoustic measurements for our mimimamo headphone covers. Listen to the audio files with your headphones and experience the world of binaural recording. 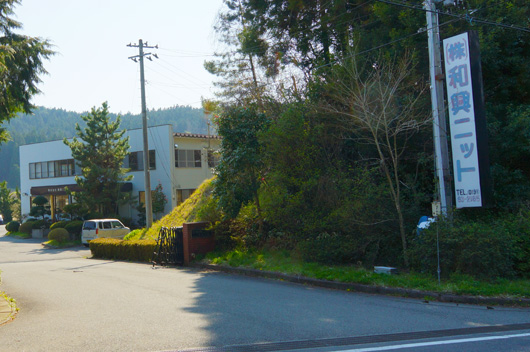 We visited a factory of Wakoh Co., Ltd., a contract manufacturer of mimimamo, and recorded sound inside and outside the factory.

It is located on a mountain, a one-hour drive from the city of Ichinoseki, Iwate. The weather was fine on that day, and we heard a lot of birds singing.

The person speaking in the audio is Masayuki Hayashi, President of Fifty Square. You can also hear the voice of Mr. Kokubun, President of Wakoh. 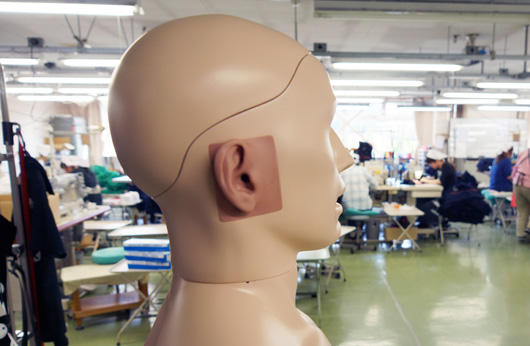 The sewing section of the factory has rows of sewing machines, whose whirring is audible throughout the room.

While household sewing machines generally make a clattering sound, the industrial machines used here make more of a whirring noise because they run at such high speeds.

You can hear the machines running, near and far, as well as the fast-talking female workers, and get a sense of the bustling atmosphere. 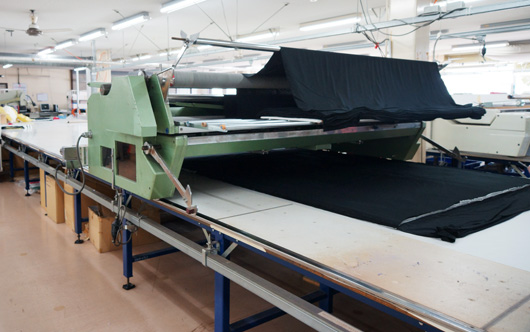 This is a cutting machine (known as "Odachi") that cuts a bolt of fabric into the desired length to be processed.

The green machine moves from side to side on the table, cutting and stacking the fabric.

You can hear the clanging and squeaking sound it makes as it moves from left to right. The sound gives you the impression that the machine is time-worn. 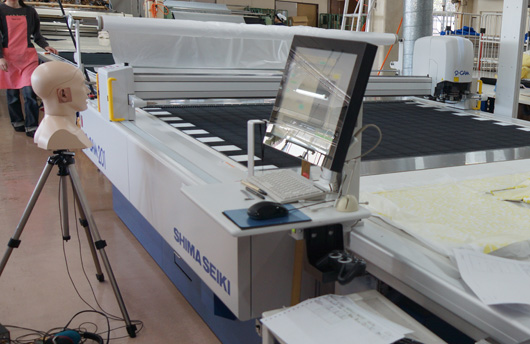 This is an automated computer-controlled cutting machine (known as "Kodachi")

which cuts the fabric brought from Odachi into the round shape of mimimamo.

This cutter is a new model and sounds very modern, like a robot, especially when the cutting head is moving. 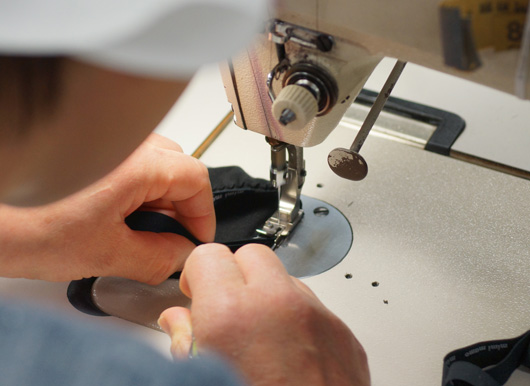 This is the sound of mimimamo being sewn. The round piece of fabric is rotated 90 degrees, and held with pincers as an elastic cord is tugged and sewed to the fabric, creating neat folds.

This sewing process is much slower than others, so it makes a light rustling sound. You can also hear the pedal below the sewing machine being stepped on.

Since we were shooting pictures while recording the sound, you can also hear the shutter sound from the left. 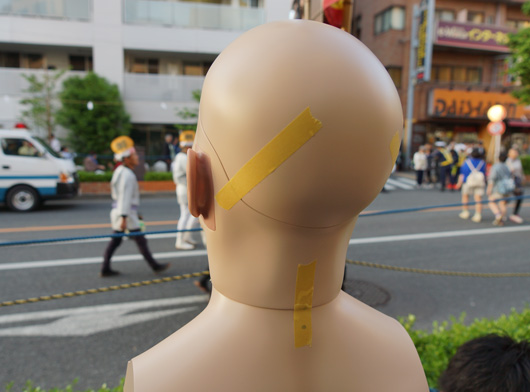 This shrine holds a festival called "Kurayami Matsuri (Darkness Festival)" every May, which includes the playing of giant taiko drums.

You can hear the drum gradually approaching from the right side. It's an explosive sound, like fireworks.

From the left you can hear the commentary on the drum. By certain measurements, they are the world's largest drums. 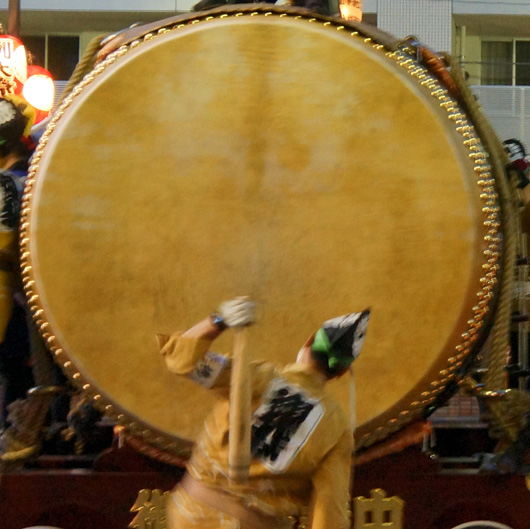 You hear the sound of two giant drums being beaten from the left and right.

With a wild cry, the drum on the right is pulled and gradually approaches.

The closed shutters of stores to the rear of the microphone resonate with the acoustic pressure from the drum. It sounds like a thunderous roar.

When the drum on the right side came right in front of the device, the sound was so loud that it exceeded the recording range and a part of the sound was distorted. We underestimated the power of these supersized drums! 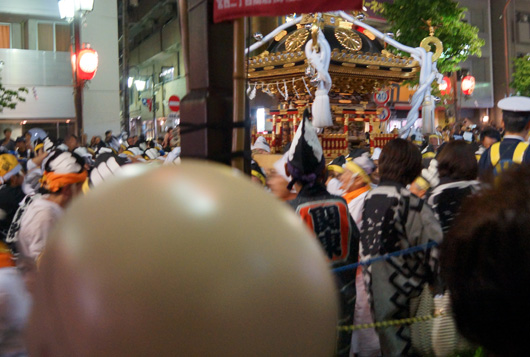 Behind the drums, a mikoshi (a portable shrine), is approaching from the right.

In addition to the earth-shaking sound of the giant drums, the voices of the people carrying them become more energetic.

Here comes the climax of this festival.

*1: The QuickTime plug-in is required for playing high-resolution audio. Due to the size of the file, it may take some time to play the audio.